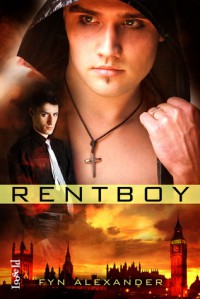 As Lauraadriana said in her review, the author takes an unapologetic "everything but the kitchen sink" approach to this book. But, c'mon! Am I seriously the only person that thinks this author should be apologizing for the Code Red levels of craziness in this book!? I mean, in the first third of the book alone, we have:

- a brilliant but socially awkward 30-year old virgin (Eddie) who insists on referring to his penis as a "willy" like a five year-old (which makes me feel creepy reading about it).

- an MC (Fox) with an alcoholic, practically comatose mother; fourteen year-old twin siblings who are mute, house-bound, possibly autistic, and just a little too close for my comfort (handing feeding each other, always touching in some way, sharing a bed, etc.); and an abusive, homophobic, criminally-inclined father who Fox wants to stab repeatedly until dead as a door nail

- public sex immediately following the aforementioned attack by neo-Nazi skinheads (I don't know about you, but nothing gets ME hot like homophobia and a black eye)

- not one, but TWO bouts of public nudity in which Eddie somehow didn't realize he was fully exposed (how any man would fail to notice that his dick was hanging out of his pants, I do not know.)

- an oh-so-convenient six-degrees-of-separation-from-Kevin-Bacon type scenario in which Fox just happens to go to school with Eddie's younger sister.

- one of the clunkiest "outings" I've ever read followed by Fox hypothesizing that Eddie's Dutch grandmother is an ex-Nazi sympathizer (what is it with Fyn Alexander and the Nazis?!)

and the straw that broke the proverbial camel's back:

- pony play without any prior indication that either character was so inclined.

Yeah. All of that and I was only a THIRD of the way through this book.

I had to stop. This story just wasn't grounded in any reality that I'm familiar with and I couldn't suspend my disbelief any longer.

It's a shame, really, because the book began with some serious potential. I enjoy stories in which completely opposite characters find common ground and fall in love. I dig stories in which the characters have a significant age gap and bring different life experiences to the table. I appreciate well-crafted angst (which the cutting and abuse had potential to lead to if dealt with sympathetically). I even thought that the idea of Fox's father forcing him to steal Eddie's laptop was an intriguing premise that could have lead to some really dramatic conflict in the book's climax.

But I think Alexander got caught up in devising plot twists and trying to make his/her characters the most unique/flawed/quirky/awkward s/he possibly could, and the wheat got buried beneath a Mount Everest-sized pile of chaff.

Okay, I think this is the part of the review where I'm supposed to add in a "this book didn't work for me but it might work for other readers" caveat in order to avoid hurting anyone's feelings and to underscore the highly personal and subjective nature of reading. Whatever. You're all intelligent readers and reviewers; I know that you know this already.
Tweet