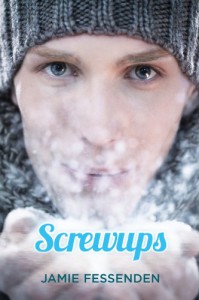 I think Jamie Fessenden's Screwups was a case of "everybody loved it but me."

The book started out strong and Fessenden's writing in those first few pages had an undeniable emotional pull. I could feel this weight in Jake's character; it was this enormous fear warring with an intense yearning - a yearning to be allowed in Eaton House, to embrace his art, to find a place to belong, to be himself, to accept himself. Call me a sap, but there was no way that I was going to be able to remain detached from his character in the face of such need. But the beauty of Screwups was that Fessenden accomplished this emotional connection between his characters and his readers in a way that was almost heartbreaking in its subtly.

"It occurred to Jake at that moment that, with her [Eva] holding his hand and Danny's hand still resting on his shoulder, this was the most physical contact he'd had in years."

Though I've never been one for gooey public displays of affection with a significant other, I do consider myself a pretty tactile person - a casual toucher, if you will. I think nothing of putting my hand on someone's back when I pass behind them in tight spaces. I pat or poke people when talking and joking with them. And if I go too long without a big, solid, two-armed, rib-squeezing hug, my body starts to crave that contact. So Jake's casual acceptance of the lack of physical affection he has received in the past hurt me on a soul-deep level. And yet it doesn't feel like the author was being emotionally manipulative; it's just a simple statement of fact (and all the more powerful for it).

There's a handful of similar moments in the first few chapters, and as I read them, I started to get excited. Was this going to be my new favourite book of 2014?!

As soon as Jake moved into Eaton House, I could feel the book start to slip away from me. I found the whole section from the moment Jake moved into the dorm until the first snowfall to be lacking in the emotion and connection that I felt reading those first few chapters. I mean, there were words on pages. They were objectively well-written and certainly edited and punctuated better than my own writing, but they evoked nothing for me. I was bored with the detailed descriptions of the D&D and LARPing experiences. And, while I could relate to some of the dorm antics from my own freshman year at university (I can recall one particularly drunken night of Gnome Hunting, and another involving a 6-foot tall Technicolored, papier mâché elephant...), I saw nary a bare butt cheek, let alone two naked brawls and tandem jack-off sessions between roommates. Maybe it is because I'm a woman. Or, maybe it's because I'm Canadian, but I just couldn't relate.

The book picked back up around 70-75% and I was able to re-invest somewhat in Jake and Danny's relationship, but the action and dialogue still felt like it was missing... something.  Between Danny's past sexual experiences, and the homophobia and abuse Jake endured at the hands of his father and brothers, the author tackled some pretty dramatic (though not entirely original) issues in the last third of the novel. And while I believe Fessenden capable of writing about these issues in a nuanced way, the execution left something to be desired. I guess I was looking for that subtly and emotional impact that he'd had achieved in those first few chapters, but I just didn't find it. Everything felt just a little... not clunky. Distant, maybe?

One thing that I've got to give Fessenden credit for, though, is the fact that this book had an incredibly strong sense of place and time. Between the D&D, the LARPing, the lack of cell phones, and the telephone booth painted to resemble a Tardis (the Tardis?), I never forgot that it was 1996. Nor did I forget that our characters were in New Hampshire or that Eaton House existed - and continues to exist today - as part of the university's vibrant arts community. His descriptions of the dorm was rich and colourful and it was easy to tell that the author's own time there greatly impacted him.

In the end, it was a sweet coming out story set against a backdrop of college shenanigans, and I can easily see why other readers will love this book (especially if they are already fans of Fessenden's work). The boys were incredibly cute together once they sorted out their issues, and the book's epilogue was sugary sweet and left me with a nice fuzzy buzz. It just slightly missed the mark for me and that makes all the difference.
Tweet