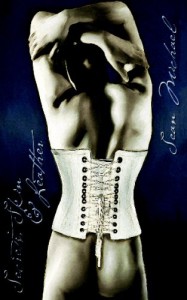 Before I begin, I feel it's only fair to let the record show that I DNF'd this book at 33%.

I know that there are a lot of book bloggers and reviewers out there that refuse to review and/or rate books that they do no finish; I am not one of them. I feel that if I make it a third of the way through the book, I have done my due diligence as a reader - I have given the author a fair shot to draw me into their world using their characters and plot and dialogue. If, a third of the way through the book I am not thoroughly enjoying the story, I see little point in continuing to read it. Life is simply too short to spend it reading books that do not resonate with me, personally.

Still, that doesn't mean that I didn't have opinions on the parts of the book that I did read. So here goes... Oh, and if you get bored with my review, feel free to DNF it (it's only fair).

Secrets, Skin and Leather opens with Dillon Walsh sitting in on the most boring business meeting in the history of business meetings. A half dozen dull-as-dishwater office drones are discussing... To be honest, I don't fucking know what they were discussing - it wasn't that memorable. But before you get angry and throw things, I should mention that Dillon wasn't paying attention either. No, he was imagining the various stuffed shirts in his favourite fetish wear. And what do you know? A few hours later, Dillion's having a drink in a fetish club and who's on the dance floor looking totally fuckable but one of the stuffed shirts from the meeting - Scott 'they call me Dal' Daley.

Dillon needs him. He wants him. Oh baby, oh baby.

But instead of walking a dozen steps and asking the man to dance, Dillon decides to leave the club and plot an overly complicated and bordering-on-workplace-sexual-harassment type scheme to get Dal in his bed on a tropical island. Call me simple, but I didn't really see why it had to be this way.

Oh wait, there was no more plot. From this point until the point where I threw in the proverbial towel, the book was just unrelieved fucking. Like, bunnies-would-feel-upstaged levels of fucking. Some readers might enjoy this. If they do, they'll probably stick with the book and read it through to the end. I won't lie, the sex scenes were pretty hot, but they weren't enough and I quickly found myself getting bored with the whole thing.

But I got none of that.

Instead, I got a 48-hour sexual marathon that left me feeling  disconnected from the characters and wondering about chaffing in uncomfortable places.

Now, I acknowledge that it's entirely possible that a plot developed in the remaining two-thirds of the novel or that the characters became more three-dimensional after they left the island. I even acknowledge that the dialogue and clunky narration may have improved over time. However, I make no apologies about preferring to have all of these elements present in the first third of a novel. I don't really think that's too much to ask.