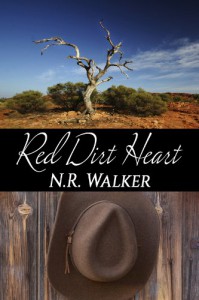 I may as well call 2014 “My Year of Reading N.R. Walker.” In a little less than two months, I’ve read ten titles by Walker. Every last one of them has well-developed plots, three-dimensional characters, witty dialogue, and so much cuteness that a basketful of fluffy kittens would lose a head-to-head competition.

And I was not disappointed.

Red Dirt Heart won me over immediately with its descriptions of the Australian Outback. Walker’s words painted the most beautiful pictures in my head of hard-packed red dirt, thick layers of dust, scrub brush, rabbit-proof fencing, and weather-worn everything. I could feel the sun beating down and the drops of sweat rolling down my temple. I could smell the pungent scent of livestock (ahhh! Eau de manure) and leather saddles. I could hear the cows mooing and the creak of the boards as Charlie and Travis stepped on the veranda. In my head, the landscape is hard, unforgiving, and just a little romantic.

I haven’t been this captivated by Australia since reading Bryce Courtenay’s books nearly a decade ago.

The characters had me falling headlong into love almost as quickly as Walker’s descriptions did. It’s hard to articulate, but there was just something about Charlie and Travis and the way that they interacted with one another from the very first moment that sort of settled over me quietly. It was like putting on a favourite sweater – the one that’s soft and thin from a thousand washes, maybe a little stretched out and fraying at the cuffs, but you know you’ll never part with it because it’s warm and familiar and comforting. Charlie and Travis were warm and familiar and comforting. But their first conversation – just a casual recitation of the Station rules, really – gave me butterflies. Reading it, I was all dreamy sighs and dopey grins.

And it only got better from there. The chemistry between Travis and Charlie is awesome. The book is filled with all of these tiny, meaningful moments – trembly kisses, silent conversations in the kitchen, a hooked foot under the dining room table. Each and every one is special. And yet the sex was hot as sin! It was so hot that I was absolutely horrified at the thought of Ms. Walker shoving these boys together with only ten condoms between the two of ‘em.

(I think that might constitute cruel and unusual punishment, Ms. Walker – to your readers if not those poor boys. Ten condoms are not nearly enough for two men that pretty!)

One of the great things about this book is that while you know from the get-go that Travis and Charlie only have four weeks together before Travis has to go back to the United States, nothing about this story feels rushed or forced. Time sort of seems to stretch out, and everything about their relationship progresses naturally. You can see them falling in lust. You can see them falling in love. You even know what the end result of the book is going to be. And yet, at no point did I get the insta-love vibes that always serves to throw cold water on my enjoyment of a book. No, their slide into love just seemed so inevitable that time didn’t matter. *Sigh*

See? There I go again.

As far as the book’s secondary characters go, I thought Ma and George were great. They were both characters I'd seen before, but ones that I love so much for their love and acceptance and no nonsense attitudes that I didn’t care in the least. After all, these are the types of characters that remind me that sometimes the best family is the one you choose to build yourself.

It's a difficult task to make the climax of any happily ever after story feel truly suspenseful and dramatic, but Walker managed to accomplish this in Red Dirt Heart. I figured out very early on in the book what was likely going to happen to Travis before his time in the Outback was finished. Even so, when my suspicions were confirmed, my heart started to beat a little faster. And when the situation dragged on a little longer than I had expected, I was left squirming in my seat barely refraining from yelling, "Stop torturing me, already!" at my Kindle.

Then there was the bit with Charlie. We all know that he was going to be outed; it had to happen in order to free him from his father's ghost and allow the boys to move forward together. But it didn't happen quite the way or with quite the timing as I was expecting. And I LOVED that element of surprise! I also loved seeing that moment of vulnerability with George afterward - it was heart-wrenching.

And then there was that final moment where the dumb boy finally realizes he's being a dumb boy and that if he could just stop being so dang dumb for one freakin' minute he could be insanely happy. Yup. I loved that moment too.

This book, you guys. This book! You need to read it.

Red Dirt Heart has easily become my new favourite book by N.R. Walker. It transported me to Australia and dazzled me with characters and a setting that refused to be ignored. If you love Walker already, you will love this book. If you haven’t discovered her yet, you couldn’t pick a better place to start. It's awesome.

"You know, I read up on all the deadly animals you got out here. [...] I'm guessing you don't have any antivenin handy and we're -" He looked at his watch. "-ooooh, a mere three hours and hello-complete-respiratory-failure from the hospital..."

"Peace," I finally admitted. "He makes me feel at peace. And happy. And scared shitless."
George smiled at me. "Sounds like love to me."
Tweet