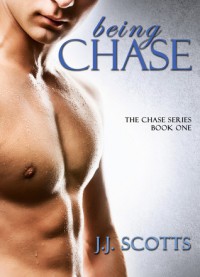 Maybe it’s because I’m currently going through the soul-crushing experience of trying to find a job in my field, but Being Chase had me at “hello.” Unfortunately, as much as I found myself relating to the main character in those first few pages, the overall experience of reading this short story ran hot and cold for me - there were aspects to it that I really enjoyed, but several others that I felt just didn't work.

When I'm reading a book, the main characters make or break a story for me. They need to be engaging and authentic and it never hurts if their chemistry together is off the charts. I loved that Being Chase had two very polar opposite characters with very distinct voices. However, that doesn't necessarily mean that I enjoyed said voices. There were definitely moments in the story in which Liam's voice came across as sweet and honest and refreshing, but most of the time I felt as if he was characterized as weak, immature, younger than his years, and . . . dare I say it? Feminine.

Don't get me wrong, not every character needs to be an alpha or charmingly arrogant, but I don't want them to be a doormat either. I just felt that Liam went along with the crazy demands and atrocious treatment of those around him for far too long. I kept thinking, "surely he's going to say enough is enough now, right?!" after each incident but he never did. Well, until he punched Chase in the face for being such an arrogant cock tease. It was like Liam finally got his man card for the first time in the story.

But where Liam's character came across as so much younger than his age, Chase's seemed far older than his. Fortunately this was done in a way that felt very authentic. Chase is supposed to be this pampered, independent, talented guy who has been largely on his own for years before we meet him, so it made sense to me that he came across as more worldly and experienced than Liam.

That said, there wasn't a lot that was likable about Chase in this story. In fact, the man is an arrogant prick. I don't necessarily say that as a criticism; I actually think a lot of readers are going to love Chase's bad boy persona and I think Scotts writes this character particularly well. I know we'll get more info about Chase and his history in the next story, so I'm trying to reserve judgement, but as of right now, I think the man's a straight up jerk. Boo hiss, Chase.

But, even though I didn't particularly like Chase as a person, and I was sort of confused by Scotts' characterization of Liam, I have to say that the two of them had AMAZING chemistry together. J.J. Scotts does the steamy really, really well. I practically had to roll my tongue back into my mouth after that first scene between them in the kitchen. *fans face vigorously* I'll take some more of THAT in the next story, please (and if you can make it full on penetrative, that'd be great)!

I think the thing that bothered me most about this story was the lack of interaction between the two main characters (especially given their molten hot chemistry together). I understand that this is only the first in a series and that Scotts needed to establish context for the two characters to meet (so she's earned some leeway from me for that), but Chase doesn't even enter the story until 30% of the way through and then they only have two or three more scenes together. I guess I was just hoping that Liam would spend less time with secondary characters and more time with Chase talking, flirting, butting heads, and ramping up all that delicious sexual tension between the two of them.

It's admittedly a minor point, but I found myself annoyed by the blurring between the lines of the real story and the slide into Chase's NA novel content. It was some of Scott's strongest writing (and I actually think that it would make a really successful NA series), but I thought that it was a solid 3-5 pages that could have been chopped in order to add a scene between Liam and Chase that would have heightened that sexual tension I was looking for.

Okay, I know my review of Being Chase hasn't been the most glowing I've ever written, but here’s the bottom line: I think that the series has an unique premise, the characters have excellent chemistry together, and Scotts' writing shows great potential for improvement. I have faith in the series and will definitely be reading the next story when it comes out.

*A big thank you to J.J. Scotts who generously provided an ARC of Being Chase in exchange for an honest review.
Tweet