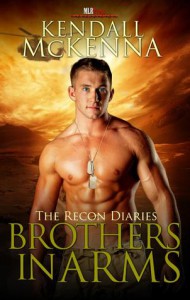 Kellan smiled wanly. He drew a deep breath. "You came for me."
"Of course I came for you. I'll always come for you."

Brothers in Arms is the first book in Kendall McKenna’s The Recon Diaries series. The book centres on the aforementioned Marine Staff Sergeant, Jonah Carver. As the second-in-command of an elite Force Recon unit currently deployed in Afghanistan, Jonah is the best of the best. So, when brand spanking new American weapons start showing up in the hands of local insurgents, it’s no surprise to anyone that Jonah and his team are tasked with protecting the VIPs brought in to investigate. However, things get mighty interesting when one of the civilian investigators assigned to the case turns out to be Carver’s former platoon commander Kellan Reynolds – a man Jonah had a blistering one night stand with several years ago.

Though she’s written nearly a dozen novels so far, this was the first book I’d read by Kendall McKenna. I wasn’t sure what to expect in the way of plot, characters, action, romance, etc., but thought the novel’s premise was interesting and original enough to give it a shot. Unfortunately, though the book had all the pieces necessary to rev my engine, the net result was a little underwhelming.

As far as main characters go, Jonah’s a pretty good one. He’s a warrior - a badass of the highest order. He’s strong and intelligent, a good leader and a loyal friend, and his ass looks daaaaamn good in a pair of BDUs. And thankfully, between a healthy fear of the military’s Don’t Ask, Don’t Tell policy (still in place at the time this book was published) and some minor personal insecurities, Jonah’s just vulnerable enough to make him interesting without threatening his alpha-male status.

His love interest, however, was a little underdeveloped. As Jonah’s former commander, we inherently know that Kellan is both courageous and honourable. He’s a born leader, well respected by his superiors and his men, and totally comfortable in his own skin. So far, so delicious.

But as I said, McKenna’s storytelling techniques meant that Kellan was more of an idea than a tangible being until about 50 or 60% of the way through the book. In fact, the first half of the story focused almost entirely on establishing Jonah’s character; his thoughts, feelings, and memories were the only thing that mattered (in addition to establishing the mystery arc). Kellan was relegated to a mere memory and everything readers came to know about him was filtered through Jonah’s eyes and dimmed by the passage of time. Though I acknowledge that some readers may not be bothered by this, it left me feeling oddly disconnected from both characters.

The one positive thing I can say about this rather odd choice was that because we hadn’t been given an opportunity to see Jonah and Kellan interact in real-time yet, when Jonah looked up from the tarmac to see Kellan step out of the plane at 50% it made the butterflies in my stomach do Olympic-level cartwheels.

If I'm being honest, I found that the novel didn’t have as much romance as I was hoping for (undoubtedly a by-product of the semi off-putting approach to telling the story). I mean, I want my longing glances and my hot monkey sex, dammit! Is that really too much to ask for?! That said, if the last few scenes of the book are any indication I’m certain that this will be rectified in the subsequent two novels. The same can be said about the action sequences. Though they were really well written - McKenna was able to give them an immediacy and chaos that you would expect in a real firefight with enemy combatants - they didn't come until the last 20 or 25% of the book. Hopefully McKenna ups the steam factor and the danger in Book 2 of the series.

Last thing… Overall, the dialogue in this book was good, but nothing special. However, there was one bit of dialogue that made me want to throw my Kindle across the room:

"Well, if you three aren't the sorriest fuckers," Jonah said as he stepped down off of the porch. "I'm here 'cause I'm still in the Corps. You ladies chose to come back." He took the sting from his words by grinning at his old friends and comrades.

I know this kind of smack talk is common amongst a lot of men (including the guys I know in the military), so the dialogue was probably perfectly in keeping with Jonah’s character. However, I can’t deny that those few simple words got every one of my feminist hackles rising. I don’t know how it’s still deemed acceptable in this day and age for people to equate my gender with the lesser, and to use the term “ladies” as an insult. If the author had used the term “gay” in a similarly derogatory manner, readers – myself included – would be up in arms about it (and rightly so!). And, fair or not, I found this passage even more offensive because the author is a woman; if we can’t rely on our own gender to stop perpetuating this kind of crap, how can we demand or expect men to do it?!

My advice to Ms. McKenna? Stick with the term “fuckers” or “assholes” (because at least they’re equal opportunity insults).