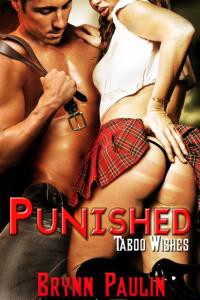 It is possible I’m just being picky. After all, the story did have its supremely sexy moments (I don’t know any woman who’s immune to a powerful man telling her to drop her panties and bend over a desk), but in the end I was left feeling… blah.

One of the things that killed the story for me was the dialogue. There were a lot of variations of the breathy, “spank me, Sir. I’ve been a bad, bad girl,” and the whole thing came off sounding like the script for a super cheesy skin flick (I laughed on more than one occasion, and I’m fairly certain that wasn’t the reaction the author was hoping to elicit from her readers). Even so, I probably could’ve forgiven the over-the-top dialogue during the role play scenes because in a weird way it kind of fits there (chances are I’d sound equally ridiculous in similar circumstances), but Paulin made the mistake of trying to combine this type of generic role play with a character who was a legitimate (if light) member of the BDSM community. To me, those robotic and decidedly unsexy phrases come across as completely insincere and, as far as I know, no Dom worth his salt puts up with a sub that lies to him. So… dialogue fail.

And then there was the nearly instantaneous I-will-love-you-until-my-dying-breath-please-marry-me-and-stay-with-me-forever-and-ever-and-ever shtick that drives me crazy when it’s written to appease expectations rather than coming from any tangible feeling between the characters. Why do authors feel the need to reach for a nauseatingly flawless happy ending? Why can’t two hot people just be attracted to each other and go at it like rabbits for a while without pledging their undying love?! I mean… this isn’t the Titanic and they haven’t missed the last lifeboat. STOP RUSHING THEM!

Verdict: I’d pass on it if I were you; the sex scenes aren’t enough to make up for the bad… well… everything else.