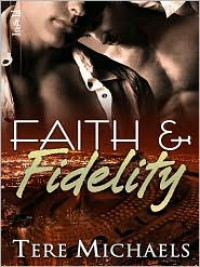 Tere Michaels’ Faith & Fidelity was like a slice of life served up in book form. It was raw, honest, humbling, and incredibly emotional (I was in tears by page 4). It included some characters that I absolutely loved, and one or two that I wanted to bitch slap every time they appeared. It had a tendency to kick you in the teeth when you were least expecting it, and yet had the ability to surprise you with its brilliance and joy just as quickly. And – like life – it didn’t unfold exactly the way I expected it to.

Interestingly, Faith & Fidelity was the first MM novel that I’ve read in which both main characters identified as heterosexual at the beginning of the story. A widower, Evan had married his childhood sweetheart at an early age, then spent the next two decades with her, raising their four beautiful children and living a pretty Norman Rockwellian existence. He’s never kissed – let alone loved – anyone but Sherri in his entire life. Matt, on the other hand, has always been a bit of a ladies’ man; he’s drifted from woman to woman, enjoying the hell out of them, but never finding anyone that could hold his interest beyond a few months. One thing’s for certain - neither man has ever looked at another guy with lustful thoughts running through his head.

I’d be lying if I said that I didn’t read the author’s blurb, do a Scooby Doo head tilt, and wonder how the heck Michaels was going to be able to make this particular gay-for-you scenario work convincingly. Thankfully, she gave the relationship between the characters time to develop naturally so that nothing about their initial friendship, that slide into attraction, or those first tentative romantic moments felt forced. It definitely had its rocky moments (I personally thought the use of the “L-word” came a little quickly), but in the end, I’d say that she did a spectacular job of weaving a story in which these two wounded alpha males could come together believably.

*snicker* Come together. I didn’t even do that on purpose! :D

In all seriousness, though, this book was a difficult, emotional read. Like a masochist, I enjoyed it, but I can’t deny that the entire thing – right from the beginning to the end – was pretty heavy. Between Evan’s grief and depression and guilt over his dead wife, Matt’s loss of his job and his reputation (not to mention his slight drinking problem), the internal struggles of both men as they discovered they weren’t exactly the person they thought they were, and the subsequent pressure of worrying about how everyone else in the universe was going to react to these changes, I don’t know if there were any moments of true levity for our characters. There were just moments that hurt a little less.

It physically hurt my heart to read about the turmoil that Matt and Evan went through in this book, but I also think that’s exactly the sort of thing that makes a book worthwhile. I mean, if I’m not moved, or entertained, or in some way changed by what I read, then what the hell’s the point?!

As much as I came to love and empathize with both main characters, I have to say that there were points in the novel in which Evan drove me batshit crazy. Having never experienced it personally, I can’t possibly understand the level of grief that comes with losing one’s spouse (or what that grief might do to a person). However, the man has four children to take care of… the way that he drew into himself after Sherri’s death (and again after he broke up with Matt) rather than taking care of the emotional well-being of his children seemed incredibly self-indulgent to me. I mean, pull yourself together, man! Don’t just say your children are your number one priority, make them your number one priority!

Also, the fact that he didn’t do an enormous amount of groveling after breaking Matt’s heart into a million tiny pieces was a little hard for me to take. Don’t get me wrong, I want my happily ever after, but I also want to make sure that all of my lovely MCs get exactly what is coming to them. And Matt was definitely owed an apology (and at the VERY least, a little full-on penetrative butt sex!).

There were a couple of minor typos and punctuation errors in the book, but nothing that couldn’t be overlooked. Well… okay… Michaels’ often improper use of the em dash drove me bonkers, but whatcanyado (I’m picky like that)?!

Verdict: This book was equal parts love and heart break for me. I highly recommend it, but I caution readers to pick it up with an open mind, some patience for our bumbling MCs, and a box of tissues nearby (this one’s a tear jerker)!