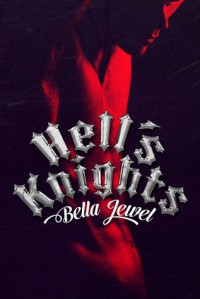 I have a little secret to share with you… I judge a LOT of books by their covers. If the cover art is sexy or sweet, if the colours are appealing, and the fonts don’t make my eyes bleed, chances are I’ll be willing to give the book a shot. Not so surprising then that between the bold colours of Hell’s Knights’ cover and a model with abs so cut I could do my laundry on them, I was already pre-disposed to love the first book in Bella Jewel’s MC Sinners series. Pair that with glowing reviews from many of my trusted GR friends, a practically NC-17 rating, and an author’s blurb that described the book as a “modern day biker romance,” and I was rubbing my hands together in gleeful anticipation. (I also don’t suppose it hurt that I was picturing Jax Teller and the boys of SAMCRO when I hit that “Buy now with 1-Click” button…)

But despite all its initial promise as an indulgent, smutty read, Hell’s Knights turned out to be one hot mess of a novel.

Addison is NOTHING like your typical romantic heroine. The child of a junkie whore and an absentee biker father, Addi has had to endure more hardship and pain in her first twenty-one years than most people do in an entire lifetime. She grew up poor and hungry, neglected by her mother, surrounded by drugs, and subjected to the vilest abuse a woman can endure. Life has taught Addison to trust no one, depend on no one, and love no one. It has also taught her that she is unworthy of love. But just as her despair and hopelessness reach their zenith, Addison’s mother dies of a drug overdose and Addi finally sees her chance to escape…

I have to give Addison credit – the girl’s a survivor. She’s lived a life that no one – male or female – should ever have to experience and yet she emerged from the darkness swinging. She’s bold, brash, mouthy and fiercely independent. I liked that she was strong enough not to take shit from anyone (not her father, not Cade, not that super skank Britney), and that she refused to let her actions be controlled by Cade’s often ridiculous edicts (not such an easy feat given the misogynistic environment inherent in many MCs).

Unfortunately, Addison is also one of the most idiotic female characters ever created in the history of writing. I’m serious… If I had one, Addison would get filed under my “To Stupid To Live” shelf.

After arriving at the Hell’s Knights compound, Addison made stupid decision after stupid decision regarding her safety. Now, as I said above, I’m all for Addi giving Cade the metaphorical (or literal) middle finger when his demands were given solely for the purpose of being controlling and possessive. However, when the man you love tells you to find a ride to work with a friend (or ask him for one if need be) rather than walk along a deserted stretch of highway by yourself when a known psychopath is trying to hunt you down so that he can torture and then murder you, ignoring him doesn’t make you independent or adorably stubborn; it makes you STUPID. And I’m sorry, but characters that stupid deserve to be kidnapped and shot multiple times.

Ack! There’s no excuse for such an idiotic heroine. The majority of readers in this genre are women and we are AWESOME. We deserve to have equally awesome women portrayed in the books we read!

As for Hell’s Knights’ leading man?! Well Cade is the kind of alpha male capable of melting a woman’s panties at ten paces with nothin’ but a smile and a wink. He’s arrogant and rough around the edges, dominant, a little sexist, and more than a little possessive. Honestly, he’s the total fantasy. In real life I’d either smack the shit out of - or walk away laughing from - anyone that spoke to me or manhandled me the way that Cade does to Addison. But in a book…? Cade had ALL the little lights and bells and whistles inside of me going off like the pinball machine from Tommy. Yowza!

Above and beyond my difficulties with Addison’s character, I had a hard time with Bella Jewel’s writing style. Her dialogue was subpar (often repetitive or circular in nature), the flashbacks were so jarring and frequent it’s a wonder I didn’t get whiplash, and the complete change in perspective from Addi to Cade that happened around 70% - and only for the length of a single scene - was just plain bizarre. Sadly, it was the most compelling part of the entire novel - the only part that made me actually feel deeply for the characters (and it’s probably not a good sign when the most compelling part of your novel is the death of a secondary character that’s only on the page for 3.5 seconds before her swan song). Just sayin’…

Okay. Here goes the last big rant of the review in three… two… one:

The entire last 25% of this book had me doing face palm after face palm (so much so that I may have bruises on my forehead later). I’ve never considered DNF’ing a book at 90+%, but this time it was sooooo tempting.

The entire climax of the novel (if you can even call it that with a straight face) was ridiculous. I didn’t feel an ounce of true suspense at any point, it lacked realism and detail, and because I didn’t give a flying @$^# about Addison to begin with, the fact that she was in mortal danger at the end didn’t move me in the least. And, honestly, WHAT THE HELL was Jewel thinking?! Addison was shot, pistol whipped, and then stabbed in the thigh. Then after she bled out for a while, she was shot AGAIN. Who the hell is this woman, Michael Myers?! There’s no surviving those injuries! That broad would have been deader than a door nail, not conscious and talking.

And don’t even get me started on the fact that Cade’s response to seeing the woman he loves lying naked on a filthy floor bleeding to death, was to “finish” Jasper CREATIVELY! WTF, Jewel? Even a biker bent on revenge is going to have his priorities. He’d shoot the fucker in the head and then call his girlfriend a fucking ambulance!

Honestly, I have so many rage-y feelings towards this book that I better just stop there…

Verdict: The one positive thing that this book has going for it is that almost everyone I know on GR has assured me that the next book in the MC Sinners series, Heaven’s Sinners is MUCH better than this one. Plus, I’m already inclined to like its MCs, Spike and Ciara (who we met briefly in this one). Once I’ve gained some distance from this book, I will probably be willing to give Book #2 a shot.