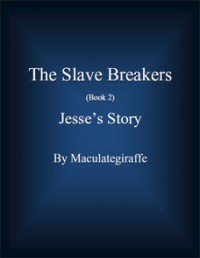 Reading Maculategiraffe’s The Slave Breakers trilogy makes me feel like I have a tornado of glitter swirling around inside of me! It definitely deserves a 3.5-star rating!

On the surface, Jesse’s Story is about the title character - another young slave boy bought by Alix and Holden in order to save him from a physically and emotionally abusive owner. (Sound familiar?! It should; it’s the exact same premise as the first book in the series, Bran’s Story.) This time, however, instead of retraining the rebellious slave so that he can be placed with a more humane owner, Holden and Alix plot to help the boy and his lover escape across the western border and live the rest of their lives as free men. In actuality, however, Jesse’s Story is really just an elaborate way to continue telling Bran and Holden’s story.

The book is set two years after Bran first declared his love for Holden and threatened to run away rather than be sold. While Bran remains the same sweet, fiercely devoted boy readers fell in love with, it’s easy to see that two years with Holden have brought about some changes as well; he’s become less shy and more comfortable in his own skin than he once was. He readily accepts teasing and physical affection from those around him, and acts as a sort of mentor for impoverished teens who are about to be sold as slaves. But despite the years of security he’s enjoyed with Holden and his family, Bran’s heart is still shadowed by the almost paralyzing fear that Holden will eventually tire of him and turn him away. His need to truly belong to and be loved by Holden is… well, it’s practically visceral.

And Holden, for all of his wonderful traits, still refuses to tell Bran he loves him. It’s a heart-wrenching situation made all the more heart-wrenching because you know the very last thing Holden wants to do is hurt Bran.

Though the whole story is well-written, Maculategiraffe's writing shines particularly in its more emotional sections. S/he has the ability to use very few words and still make me feel like my heart has been ripped out of my chest and left bleeding on the floor at a Holden's feet. Even though I'm 90% marshmallow, I'm pretty sure that's the mark of a rare talent. ;)

Holden reached out and gathered Bran up into his arms, crushing him against his chest. "I said I love you. I love you so damn much."

"That's what I thought you said." Bran nestled closer into Holden's arms. […] “What made you start?"

This was the moment that I have been waiting for since I first read Bran’s Story and I was NOT disappointed! I love that Holden’s declaration felt incredibly raw, like it was being dragged out of him against his will and better judgment, but as if - now that it was out there - he wasn’t going to hold anything back from Bran ever again. Pure awesomeness.

Verdict: Jesse's Story was everything my little heart desired. This is a series I'm destined to read over and over again.