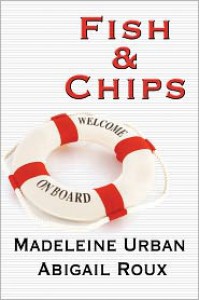 “What’s gotten into you?” Zane murmured as he dragged his lips along Ty’s exposed throat. He unfastened Ty’s pants and started pushing them down over his hips.
“Nothing, yet,” Ty answered with a slow grin. “That’s your job,” he said softly, his breathe gusting across Zane’s cheek.

Fish & Chips, the third novel in Madeleine Urban and Abigail Roux’s Cut & Run series, once again reunites readers with our favourite FBI agents Ty Grady and Zane Garrett. This time around they’re tasked with going undercover on a cruise ship to gather intel on a very elusive international smuggling ring. In order to fulfill their mission, Ty and Zane will have to impersonate two high-ranking members of the ring who’ve been recently arrested by the FBI. But there’s just one tiny catch: the two men they’re impersonating are openly gay…and married.

Speaking of heaven… That first sex scene was about the hottest thing I’ve read all year. It was some serious scorch-the-earth-take-no-prisoners kind of sex. I mean, it was totally weird and disorienting because Ty was being so submissive, and I ended up as confused as Zane was before it was all over (was Ty merely getting into the character of Del Porter?! Or, was this how he acts now that he’s admitted to himself that he’s in love?! I just didn’t knooooow!), but it was so, SO hot.

As steamy as those love scenes were, it was the emotional journey that Ty and Zane took in this novel that held me riveted from the first page to the last. Urban and Roux unapologetically put these two through the emotional wringer (both individually and as a couple) and there were scenes in which my heart practically bled for them. Zane was made to deal with his ongoing struggle with alcoholism, face some of his biggest fears, and let go of some of his past. It was rarely pretty, and sometimes I hated him just a little bit for it (even though I felt sorry for him).

As for Ty? Well, it’s no secret that I friggin’ love Ty. He’s by far my favourite tender-hearted, ass-kicking alpha male. Every time he’d get all angsty over his relationship with Zane and his fear of falling in love and not having his feelings reciprocated, I just wanted to give him a snuggle and reassure him that it’d all work out in the end. I hope. Thankfully, the authors also gave him some real bite this time around, and let me tell you… Ty in a righteous fury is a thing of beauty.

And then there were the FEELINGS. And the DECLARATION. I think my heart just about exploded with joy! Now, if only somebody would get his head out of his ass as well, my world could be complete.

The humour in this book was so, so well-written. I had not one, but two laugh out loud moments in the first scene alone, and the jokes just kept on coming. In fact, I was snickering with such unholy glee at Ty and Zane’s equally horrified reactions to their newest UC assignment that people in the coffee shop where I was reading started to give me weird looks. Whatever, they’re just jealous.

As I’ve been reading the Cut & Run series, I’ve been really impressed with Urban and Roux’s ability to give each book a completely unique feel. I mean, the serial killer case had a different vibe to it than the couple’s vacation time, and both of those were vastly different from this undercover case. Yet, all of these cases and interactions seem like plausible parts of the same universe and we get rewarded for reading each new book by seeing the natural progression of Ty and Zane’s relationship. Personally, I can’t wait to get my hands on Divide & Conquer to see what happens next.

Verdict: Everything about this book was awesome! I thought the action and demands of the smuggling case were perfectly balanced with the Ty/Zane relationship struggles and romance aspects of the book. It’s been a long time since characters in peril and love scenes have given me sweaty palms in equal measure. That’s got to be the sign of a good book, doesn’t it?!