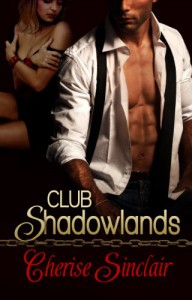 First things first: the premise of the story definitely demands some suspension of disbelief (within moments of walking into the club, Master Z strips off Jessica’s clothes, watches her shower, and then dries her very, very thoroughly). Let’s be real, any modern woman in her right mind would have taken a swing - or, at the very least screamed - at the crazy man who barged into a women’s washroom while she was changing. Instead, we’re supposed to believe that Jessica’s natural yet untapped submissive nature instantly responded to the authoritative tone in Master Z’s voice… Uh, okay. But, if you can roll with this unlikely reaction (and the fact that Master Z’s also a bit of a mind reader), the rest of the story’s okay (but just okay).

Verdict: Good, but not excellent. Still, the series – and Sinclair – have definite potential, so I’m willing to give Dark Citadel (Masters of the Shadowlands #2) a try as well.